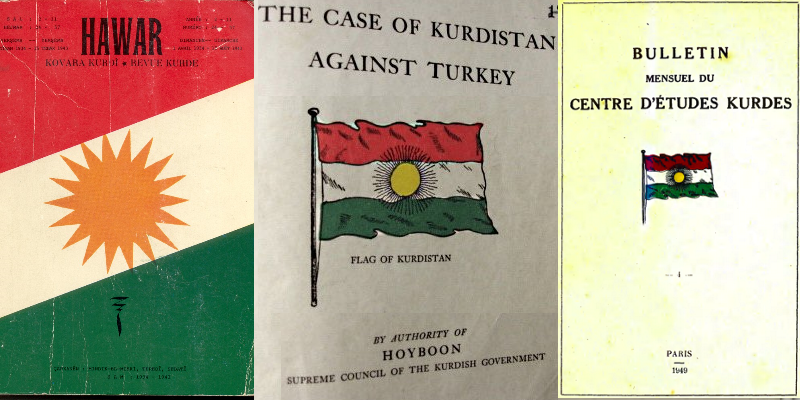 The National Flag of Kurdistan

The aim of this document is to introduce in brief the history of the current National Flag of Kurdistan and to help those who use the Kurdish national flag to reproduce it correctly. The document contains the basic rules for the construction of the flag as well as the standard colors to be used.

The National Flag was first introduced by the founders of “Society for the Uplift of Kurdistan” movement to represent the Kurds in their struggle for independence from the moribund Ottoman Empire. It was subsequently presented to the members of the international delegation at the Paris Peace Conference that devised a plan for Kurdish independence as a part of the Treaty of Sèrves with Ottoman Turkey in 1920. Under the same flag  Kurdish leaders of the Khoyboun, (Xoybún “independence”) announced the formation of the first “Kurdish Government in Exile” in 1927 and fought a drawn-out war until 1932, in order to revive the Kurdish national independence, lost since 1848.

In 1946 and the creation of the Republic of Kurdistan at Mehabad, the old “sunny flag” was adopted by its parliament as the official Flag of the Republic. Following these historic background, the National Flag is widely adopted in Kurdistan and has been set aloft by various Kurdish movements and entities in all sectors of the land.

The “sunny flag” has thus been consecrated by the blood of all Kurdish patriots of this century, from tens of thousands who fell in defending the independence movement under the Khoyboun, to the President of the Republic of Kurdistan and his elected cabinet who were hanged in sight of this flag by the foe. The flag was aloft when Dersim was immolated in 1938; it was aloft when wounded Kurds on stretchers were placed before the firing squads in 1980; it was aloft when Kurdish civilians were gassed in their thousands in cities and towns in 1988; it was aloft when millions were driven from their villages and towns that have been set alight since 1989; and, it remains aloft everywhere today–150 years after the loss of Kurdish independence–when Kurds are redoubling their perennial struggle to regain their dignity and equality with other nations by reviving their right to choose the course of their own future.

DESCRIPTION OF THE NATIONAL FLAG:

The National Flag of Kurdistan consists of a tricolor field and central emblem.

The Kurdish flag has three horizontal bands. The upper stripe is red, the middle one white and the bottom band green. The width of the flag is two-thirds of the length.

The primary Kurdish characteristic of the flag is the golden sun emblem at the center. The sun emblem has a religious and cultural history among the Kurds, stretching into antiquity. The sun disk of the emblem has 21 rays, equal in size and shape. The number 21 holds a primary importance in the native Yazdani religious tradition of the Kurds.

Using the given flag dimensions of 2:3, the sun disk has a diameter of 1.0 including the rays and 0.5 without them. These rays have straight sides, come to a sharp point at their outer end, and form an inverse point where they meet each other and the central disk.(Figure 3)

The sun appears in the exact center of the flag. (Figure 4)

The sun is placed so that the flag’s vertical meridian passes through its topmost point. (Fig. 5)

The flag is in the following colors:

Prepared by: Dr. Bijan A. Eliasi
Of consultation: Prof. Mehrdad R. Izady
Special thanks to The Flag Institute for their continuous support.