The Local Vandals Destroy Another Piece of Kurdish History 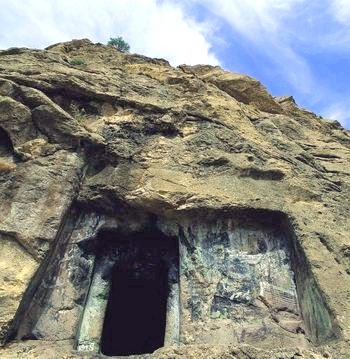 Tagheh Farhad or Rawansar tomb is a rock tomb near the small town of Ravansar (Kurdish: Rewanser) 57 km north-west of Kermanshah (Kurdish: Kirmansha) in May province in Kurdistan. It is known as Tagheh Farhad among local Kurdish inhabitants of Rawansar. They believe it was cut in the rock by Farhad, a legendary character who fell in love with Shirin, the wife of Khosrau II of Persia. The first archaeologist who visited the tomb was Massoud Golzari, an Iranian archaeologist who attributed it to Median period.

It is revisited and examined by Calmeyer, German archaeologist and Iranologist (b. 5 September 1930 in Halle, d. 22 November 1995 in Berlin), who according to some evidence related the tomb to Achaemenid period.

The town Rawansar is located at the foot of a isolated rock called by locals Qolleh. The tomb is cut into northern face of the rock, looking out over the plain. An area was smoothed to form a vertical facade with a narrow ledge at its foot; and at one side of this facade a rectangular doorway was made, probably to be closed by a single slab of stone. This leads directly into the tomb chamber, which is roughly square and quite plain, there is nothing to indicate how the dead were disposed of in it, but it is large enough to have held several coffins or numerous receptacles for bones. Outside there are carvings in the smoothed area, but is badly weathered. These reliefs consist of a human figure that standing close to the door and his face is toward right. Above is a man on a winged disk that faces left.  Under this winged figure there is a parallelogram diagonally laid and divided by 12 longitudinal lines which interpreted by Calmeyer as wood fuel. Above the tomb the cliff is almost sheer, but from below it is accessible, no attempt having been made to smooth away the rock; and this may indicate that it was a family tomb, used repeatedly.

The destruction and looting of the Kurdish historic and archaeological past is nothing new. Dams, road building, urban sprawls–have all been fast at work destroying artistic and archaeological monuments and sites all over Kurdistan. These are, however, usually orchestrated by the governments that rule different sections of Kurdistan, and are often–although not always–just through sheer and callus neglect rather than design. What is incomprehensible, is the indifference of the Kurds, and more so, their participation in this on-going destruction.

A few years ago, the locals in Kirmanshah region knocked off and stole the head of the famous statue of Heracles that is carved into the side of the historic site of Mt. Behistun/Bisetun. It was recovered by the local authorities and glued back to the statue. It was broken and stolen again. And again it was recovered by the police and reattached to the statue!  Obviously, this was done by the average people for fun or trophy hunting. A professional art thief would have never been caught–twice–with the loot!

Now has come the turn for the ultimate vandalism by the Kurds of their own heritage: the destruction of the 2500 year old tomb at Rawansar, that is carved into the mountainside not too far from the same Mt. Behistun near Kirmansha. Some locals stuffed the  tomb’s cavern with car tires and set it alight!  The cave and the mountain being of soft limestone, the heat lead to an explosion in the rock, destroying much of the historic tomb. And this, just “for fun.”

The badly damaged historic monuments can be architecturally dated to the Achaemenids, probably after the reign of Darius I. The relief was already in poor condition due to the softness of the limestone rock. Carved to the right of the entrance and beneath a winged disk surmounted is a human head, a parallelogram and diagonally laid divided by 12 longitudinal lines, the relief of Dascylium (Ergili) near Istanbul, and passages of Strabo, Appian, and Nicolaus of Damascus, Herodotus are also demonstrating similar offering scenes on bundle of woods.