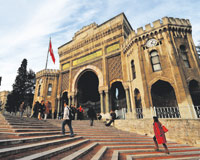 The state-owned Turkish Radio and Television Corporation’s (TRT) recent launch of a TV channel, TRT 6, has been followed by debates at the Higher Education Board (YÖK) and universities concerning whether universities should open Kurdish language and literature or Kurdology departments.

Until now, information on the social, cultural, economic, historical and political lives of Kurds has generally been collected by the state’s intelligence services, the antiterrorism units of the police department or the relevant units of the military. Universities have failed to conduct academic studies that focus on Kurds. Some of the scant number of studies conducted in this context has been maimed by their ideological biases and their inclination to advocate the perspectives offered by the official ideology. Thus, it is safe to argue that our country is in need of a serious, comprehensive and systematic accumulation of knowledge in the field of Kurdology as an academic discipline that is free from bias and untainted by the official ideology. In terms of its importance with respect to the country making up its mind about what should be done with the country’s biggest problem, the Kurdish issue, one can see that there is the practical and urgent need for creating a body of data and information produced by academic studies.

Kurdology treated as a taboo subject

If Kurdology becomes part of the relevant faculties of universities as an academic discipline, this will ensure that the state, the intelligence services, nationalists and big imperial powers can no longer be the active players in the production of information on Kurds. Until now, universities have tended to treat Kurdology as taboo, the reason why the gap in this field has been filled by the above-mentioned players. Universities should be made into the players that produce academic and sound information in the field of Kurdology. Otherwise, ‘Kurds’ will continue to be overshadowed by the ideologically motivated information and value judgments produced by players other than universities.

Kurdish studies, or Kurdology, have since been treated as part of Oriental studies. In other words, Kurdology has been seen as part of Orientalism; well-known Kurdologists are also important Orientalists. Kurdology has also been suffering from the influence of nationalism. There are a number of studies that treat different characteristics of Kurds from different nationalist perspectives. Kurdology has been squeezed into a narrow space under the pressures of nationalism and Orientalism. Thus, establishing Kurdology as an autonomous discipline, independent from nationalism and Orientalism, is an obvious need. This is to make sure that Kurdology, as an autonomous academic discipline can overcome Orientalist and nationalist influences in time.

As long as it is tainted by Orientalism and nationalism, Kurdology will continue to nurture risky perspectives. Many studies just serve to create or nurture antagonism or polarization. There are a considerably high number of Kurdology studies that invent or lend support to Turkish-Kurdish antagonism. Instead of antagonisms such as Turkish-Kurdish polarization, studies that authentically concentrate on social, cultural, historical, literary and other characteristics are needed. Creating a Kurdology that is distanced from these antagonisms will ensure that the polarization-based mentality that treats Kurds as the opponents of some entity will degrade intellectually.

A major characteristic of the Kurdology studies conducted so far is their divisiveness. The majority of these studies have tended to portray the problems Kurds living in a particular country are having with that country’s government, from an ideological and nationalist perspective. Failure to treat Kurds as a whole and give them primary focus is the most obvious defect of these studies, which cannot properly be termed Kurdology. The relations of Kurds with other states or other peoples are important, but it is not correct to make these relations the main focus of Kurdology as a discipline. We need a Kurdology that directly deals with Kurds.

In many studies on Kurds, one can discern a homogeneous and standard construct with respect to Kurdish identity and culture. For the most part, these studies ignore both the changes and transformations Kurdish identity and culture have undergone in time, as well as the social and culture interactions of Kurds with other societies. Moreover, few Kurdology studies undertake to make comparisons across cultures. It is a necessity for contemporary studies to develop theories and practical methods that take into consideration historical and social changes and that involve comparative tools.

Currently, studies in this subject are generally not conducted in the countries where Kurds live in big numbers such as Turkey, Iraq, Iran and Syria. Kurdology is said to have been born in the former Soviet Union. It has been institutionalized as an academic discipline in Armenia. Paris, Göttingen and Exeter universities have Kurdish studies departments, and there are many Kurdish institutes in Europe. Academic journals such as Studia Kurdica, Etudes Kurds, Kurdologie and the Journal of Kurdish Studies are published in the US and Europe, and international Kurdology conferences are being held in various Western countries every year.

It is abnormal for Kurdology to take root in the countries that are not native to Kurds. Thus, Kurdology should be studied in its own geography. Opening Kurdology departments at universities will help institutionalize Kurdology as an academic discipline and normalize the Kurdish studies field.

*Professor Bilal Sambur is the director of the Religious and Freedom Studies Center.